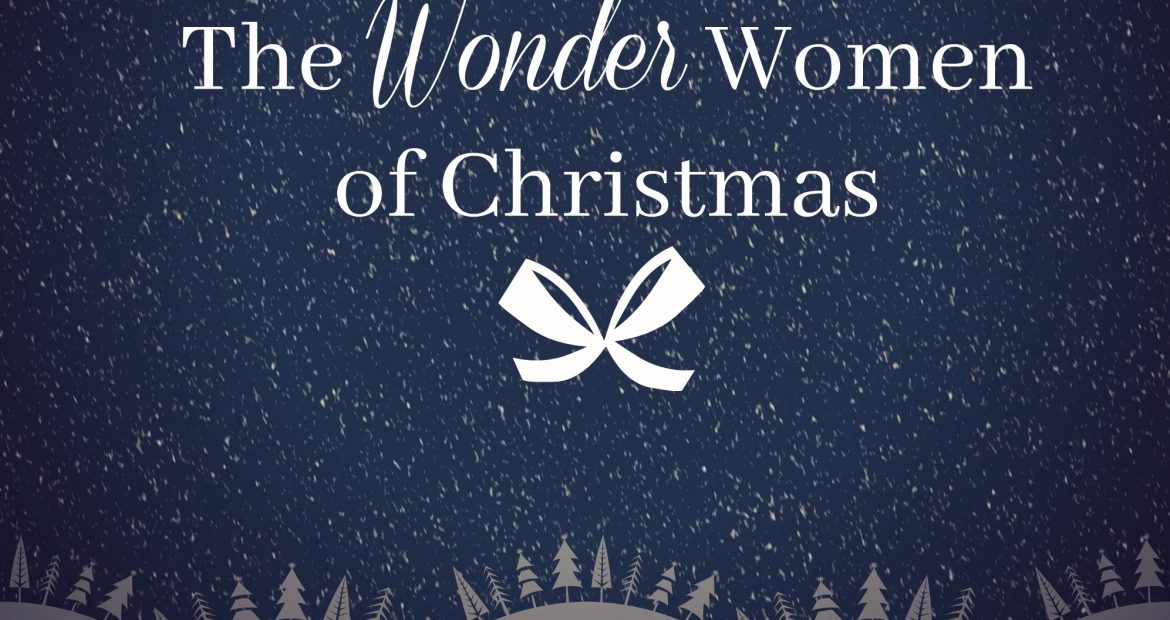 It is easy to lose sight of the wonder of Christmas in the midst of all the commercial trappings of the season (shopping, gifts, decorating, meals, baking, etc.). Not that these things are bad in and of themselves, but if they become the focus, we are likely to miss out on taking the time to ponder the true wonder of Christmas. Webster’s Revised Unabridged Dictionary defines wonder as “that emotion which is excited by novelty, or the presentation to the sight or mind of something new, unusual, strange, great, extraordinary, or not well understood; surprise; astonishment; admiration; amazement.”

Every year about this time, I love to read the stories of the women of Christmas. There are three;

I call them “wonder” women, because their lives reveal extraordinary moments of wonder, moments that I am able to share, that inspire me, and cause to ponder the deeper meaning of Christmas.

Among all the godly Jewish maidens of that time in Palestine, why did God select such a humble peasant young woman as Mary? Her choice by God to be the mother of the Incarnate Son is as mysterious as her conception of Him within her virgin womb. When the fullness of time had come for Jesus to be manifested He did not go to a city, but to a remote and inconsiderate town—not to a palace but a poor dwelling; not to the great and learned but to lowly partisans—for a woman to bring the Savior into a lost world. The gentle and lowly Mary of Nazareth was the Father’s choice as the mother of His beloved Son, and that she herself was overwhelmed at God’s condescending grace in choosing her is evident from her song of praise in which she magnified Him for regarding her lowly estate, and in exalting her (All the Women of the Bible).

We discover Mary’s wonder moment in Luke 1:46-55. It is a priceless moment, a song Mary belts out with joy, a song that is so filled with praise and rejoicing that it has been called the “Magnificat”. Mary’s song reveals a young heart and mind thoroughly saturated with the Word of God. She sees the bigger picture, and celebrates in God her Savior, believing with all her heart that salvation will come through Jesus Christ. She considers herself lowly, and prophesies that Jesus will scatter the proud and exalt the lowly. Mary has fully surrendered her own concerns to trust and rejoice in God’s plan even though her son would later hang upon the cross. Donald Davidson reminds us, “In that moment the tremendous truth must at last have dawned upon Mary, that He who hung upon the cross was not her son; that before the world was He was; that so far from being His mother, she was herself His child.”

OH THE WONDER OF THE INCARNATION!

MEDITATE ON IT DEEPLY THIS CHRISTMAS!

Only the humble believe Him and rejoice that God is so free and so marvelous that He does wonders where people despair, that He takes what is little and lowly and makes it marvelous. And that is the wonder of all wonders, that God loves the lowly…. God is not ashamed of the lowliness of human beings. God marches right in. He chooses people as His instruments and performs His wonders where one would least expect them. God is near to lowliness; He loves the lost, the neglected, the unseemly, the excluded, the weak and broken.― Dietrich Bonhoeffer.

Enjoy Mary’s Magnificat, sung by Todd Agnew. Embrace her song in your heart today! Truly her wonder will become yours!